We hear the moving story of Kathleen DiChiara, suburban housewife who became very concerned about human hunger in the 1970s. This motivated her to start collecting food at church, and eventually other sites, and then to organize distribution to people in the nearby inner city. Over the years, she has developed one of America’s most respected anti-hunger services, which last year fed more than 900,000 people. One of the warehouses is the size of seven football fields. In addition to relieving hunger—a problem that has increased in the recent hard times—DiChiara’s organization trains people (including some who’ve emerged from prison or drug rehab) to find stable employment in the food services industry. An inspiring tale of how one compassionate, determined person can make an enormous difference. 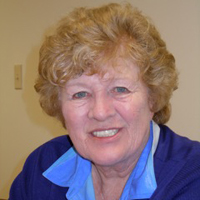 When I first started, people were dealing with situational hunger—an illness, a loss of a job, something catastrophic in their life. And it was clearly an emergency. That’s why they were called “emergency pantries,” and then there were soup kitchens in the major urban areas. They were rescue missions dealing with maybe an on-the-street alcoholic population and now there are soup kitchens in the suburbs, in the country, they don’t call them that. They have other nice names for them, but they are seeing families.”