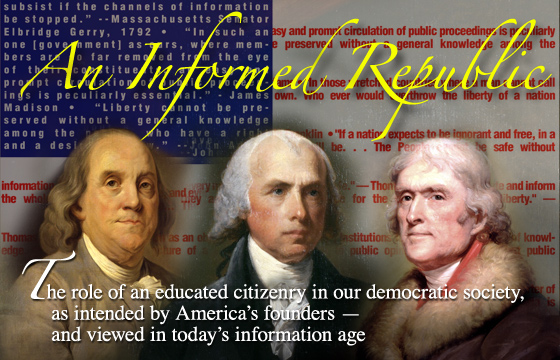 America’s founders recognized that without a king, the fledgling nation would need an informed citizenry—or their bold experiment in democracy would fail. So in early America, the government subsidized newspapers, established the postal system to facilitate information flow and drew up plans for public education. But now in the digital age, does the demise of newspapers threaten citizens’ access to quality journalistic information? Does remarkably low civic knowledge by average Americans weaken the fabric of democracy? This new one-hour Humankind documentary features retired Supreme Court justice Sandra Day O’Connor, Pulitzer Prize-winning historians Gordon Wood and Annette Gordon-Reed, new media analyst Robert McChesney, voices of tourists at the Newseum, and others.

It wasn’t going to be on autopilot. It required direct citizen participation. And I think there were many at the time who thought that it was an experiment that couldn’t succeed. That self-rule was very unlikely in a society as diverse as what was happening in this country, with people coming from various places in the world and, as it turned out, a very geographically large country to be in. So there were lots of doubts about how it would work. It was clear I think very early in the United States that it was necessary to have some form of getting our citizens informed about the structure of government, and how citizens could participate and be part of it. That was essential.”