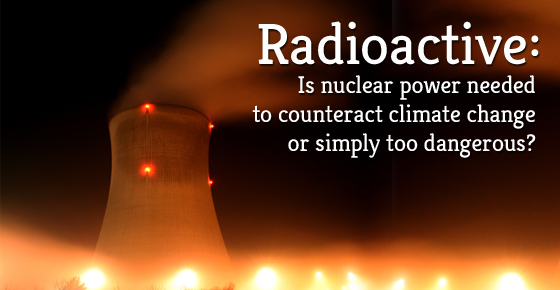 The energy from one uranium molecule, used to fuel nuclear power, is a million times greater than that from one molecule of coal, commonly used in electricity generation. And because nuclear energy facilities emit less global warming pollution (although they do emit some), a debate has emerged over whether to expand nuclear power to counteract climate change.

Nuclear critics maintain that a history of catastrophic accidents, including Fukushima, Japan in 2011, and near-catastrophes, including Detroit in 1966, make this technology too dangerous. And there’s the unsolved problem of nuclear waste, which remains dangerously radioactive, in some cases for hundreds of thousands of years. In this documentary, we hear nuclear experts pro and con, an emergency room physician, and a variety of voices telling the story of a controversial reactor in Vermont, which is perhaps America’s greenest state.

From 1990 until 2010, I was telling people that we should have renewables, and we shouldn’t have coal or oil, but the bridge technology should be nuclear. If there was not enough renewable energy, we could bridge that gap with nuclear power. And then the [Fukushima] accident happened in 2011.”

Back in 2008, we launched very publicly a very aggressive strategy around ramping down our dependence on nuclear energy, and ramping up our dependence on renewable energy—but using nuclear strategically in the portfolio to help us keep it low carbon.”